“How a diver and a baker learn coding?” part I 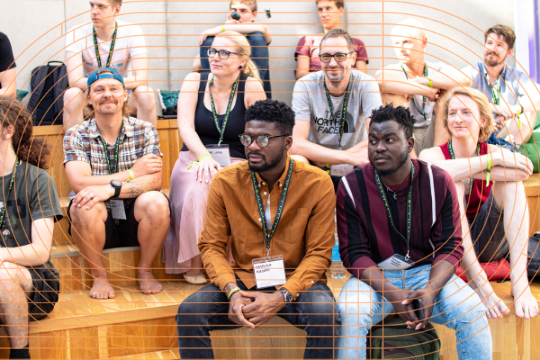 When a typical university lasts for 3-5 years, then kood/Jõhvi offers a practical hands-on intense program which takes up to 2 years. The graduates are welcomed to become employees of known unicorns such as Bolt and Wise, but also other IT- companies. It doesn’t matter that one will not get a traditional degree – the skills obtained in this school are highly valued in the job market which is expressed in the high salaries of the positions.

The first step in the application process in 2021 was to take the Online Test which tested the capability of the memory and logical thinking skills. After working on a programming task for an hour and a half, I feared the idea of getting into kood/Jõhvi would just become a faint memory. After a few weeks, however, I got a pleasant surprise in the form of an email: “You are one of 600, congrats!” I was also informed that 3300 candidates applied – the youngest being 11 and the oldest 77. Only people who are 18 and older would be accepted.

What is this place? 🤩

“I’m a psychologist by education, but I’ve been working mainly in and on the sea,” says diver Markko Junolainen who is one of students who have been accepted to the Selection Sprint of kood/Jõhvi. After the Sprint, only the best will be accepted to the 2-year program.

During the Selection Sprint, I am surrounded by welders, actors, mechanics, bakers, and even trained programmers. Markko Junolainen is one of these compelling examples – he is a 38-year-old family man, who moved away from Estonia nearly 15 years ago to live in Egypt, Thailand, Maldives, Indonesia and other exotic places. “I started off as a diving instructor and then for the last five years I’ve been a commercial diver. I’ve been thinking about diving into IT for a long time,” he says.

Now we have reached the last step of the application process – 3 weeks of intense coding at Sillamäe, otherwise known as the Selection Sprint. “The strongest will swim through it,” I heard one of the founders Taavet Hinrikus say on a radio show.

I get to Sillamäe one day before the start of the first Selection Sprint. The actual school building in Jõhvi is not quite done yet, therefore we will be studying in Ida-Virumaa vocational college in Sillamäe. The students will be placed in a dormitory.

On the first morning of the Sprint, the school’s staff gives us a small speech and after we head to the classrooms to start working. Considering that there are also international students involved, all communication and work is in English. We open our laptops and dive into programming tasks. There are three types of exercises in our online environment: mandatory, optional and bonus tasks. There is plenty of work, some of which has to be done on the weekend.

What makes this school unique is that there are no teachers. The school centers independent learning and teamwork. Therefore one must know how to use Google and find help from other students around them, some of which are already experienced programmers.

Welsley Gai-Yeen Lui, 28 years old and with a bachelor’s degree in programming, says that he came to this school to find connections to kick off his career. “Even though I have a bachelor’s degree, I feel that I am not very experienced in the IT field.” Lui assumed that he would spend the entire time coding, but admits that he has had some time to rest between the tasks. “This experience is like an assurance – I still have the skills that I acquired in university and I understand what I’m doing.”

“A lot of people, who have 5 or even 40 years of experience, came here to learn,” comments Markko Junolainen. “For example, one of the students is 62 years old and took these 3 weeks to learn something new. I would have never guessed that an awarded baker would come here to study coding.”

Welsley also noticed the variety of people here: “Since the school is focused on IT, I thought that there’s more competition among programmers, or people who are very interested in IT. I thought that I would meet younger people who had just finished university or high school, but there are a lot of those who have already started their career and want to change their decision.”

Karel Vendla is a 20-year-old who studied programming in Tallinn Industrial Education Center. He came from Riisipere, a small borough in Saue parish. “I’m surprised that I got into the Sprint,” he laughs, and admits that he is both excited and nervous. “I’ve been battling social anxiety for a couple of years and the thought of coming to a random place with random people was daunting. But I like the atmosphere where I’ve been placed. There’s people who are older, younger, and everyone has something to offer,” he states.

Ave Lepik, who has worked in the IT-sector for years as a project manager-analyst, was encouraged to participate in the Sprint by her talented colleagues. She has no plan of switching her current position for programming but she sees this Sprint as an opportunity to become more professional. “Because I’ve seen inconsistencies in programming in various projects throughout the years, I am thrilled that there will be a new school like this in Estonia,” she praises. “I am sure that it will raise the bar of the general quality of work.”

Want to hear more from the Selection Sprint experience? Read the second part up on our blog!