An ode to Estonian scrappiness and unity 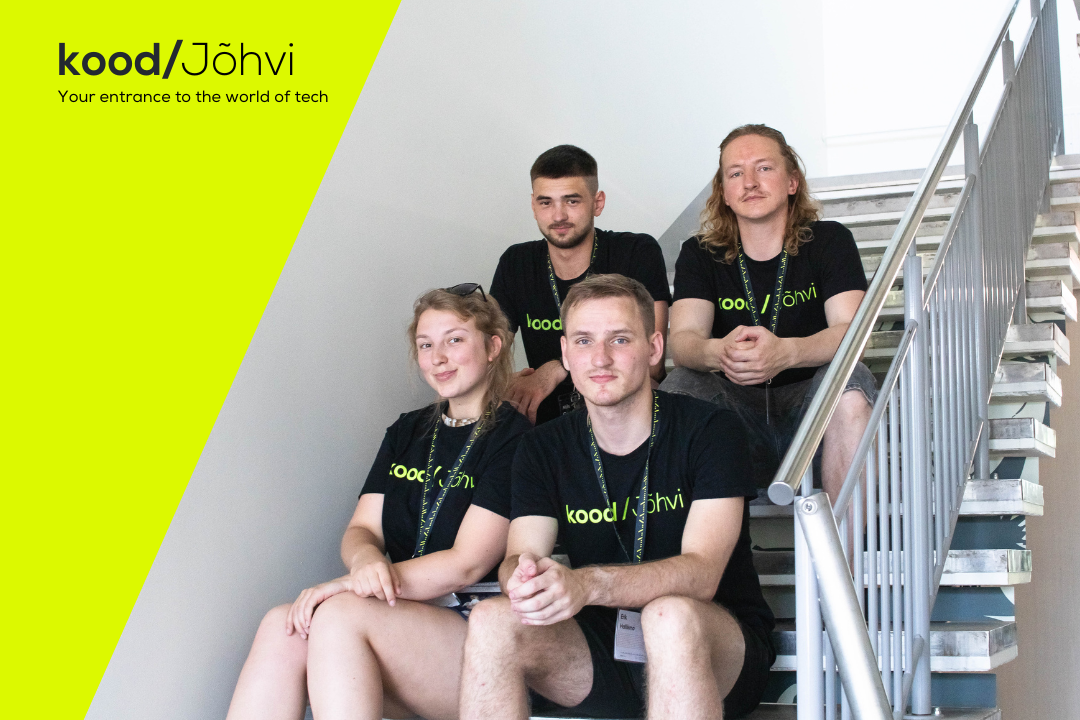 The biggest cloud hanging over the Estonian tech sector – a shortage of ICT professionals – is being tackled at kood/Jõhvi in the true spirit of the startup sector, guided by an ethos of learning on the go and aiming high.

“The situation may be shit, but it’s our fertilizer for the future.”

Considering Estonia is home to several unicorns – startups valued at least a billion dollars – the situation is arguably less “shit” than when Lennart Meri spoke those famous words. The flip side of this story, however, is that Estonia faces a dearth of talent when it comes to the Information and Communication Technology (ICT) sector. This has been outlined in multiple reports over the years, with the most recent OSKA report (English overview) stating that there will be a need for at least 2,600 additional ICT professionals every year as the sector is set to grow by about 50 percent by 2027.

According to the same report, during the 2020/2021 school year, a total of 2,900 students enrolled in IT or computer science studies across all the universities and vocational training institutes in Estonia. And yet, more than half of those students tend to drop out.

Consequently,  current training capacities and retention rates are not enough to meet talent demands from the industry. Recruiting international talent has been part of the solution for many companies, but it’s not always an easy route considering regulatory barriers and tough global competition.

This is where the story of kood/Jõhvi begins. Although, perhaps more accurately, the story begins when investor Marek Kiisa had two significant insights that he shared during an episode of kood/cast, a podcast run by the students of the school.

In 2018, Kiisa heard Naftali Bennett, the then-Israeli education minister, share how setting up coding schools in Palestinian settlements helped the region develop faster. The second insight came when Kiisa witnessed the efficacy of accelerated learning programs through the eyes of his son, who had participated in one such program.

Unable to ignore these thoughts and feeling the pressing need of the industry, he pitched the idea of a coding school to Martin Villig and Taavet Hinrikus of Bolt and Wise fame respectively. The pitch slowly got traction, and support for the idea of a coding school eventually snowballed until kood/Jõhvi had gotten eight founders on board, support from companies and funding to the tune of €2.3 million from private and government funds. All of which led to the school opening its doors in the autumn of 2021.

What is kood/Jõhvi though?

To put it simply, kood/Jõhvi is a free coding school predicated on the idea of peer-to-peer learning. There are no teachers, no tuition and the students are free to work both on their own schedules and at their own pace for a two-year learning period. The only criteria for students to apply is that they are at least 18 years old, have completed basic education and have a basic knowledge of spoken and written English.

The school is based on the 01 Edu System, which essentially gamifies the entire course and provides a fully hands-on experience for the students. The program can also be completed remotely with a few check-ins required from time to time. Specifically, the students are required to complete a set curriculum of coding challenges that build up to an impressive portfolio. The final goal of the program is to find employment as a programmer in the industry.

When sTARTUp Day asked me to write about the developer shortage in preparation for a panel discussion at the festival this August, I knew that simply reading about kood/Jõhvi and having Zoom interviews wouldn’t cut it. So I made the trip to Ida-Virumaa where the very first cohort of students is working through their studies. After all, a hands-on coding program calls for hands-on reporting.

I made my way to Sillamäe and interacted with the kood/Jõhvi team and the resident students, gleaning a deeper understanding of its culture and operations. The school is being run from Sillamäe for the time being, as the Jõhvi campus is currently under construction and set to be unveiled in October this year. Once in the county, it became abundantly clear that the region is less developed compared with the cities I’ve lived in and been to in Estonia – and it needs to invest in alternative industries to retain its young population and kick-start development.

Now, the idea of a free coding school isn’t new. For instance 42, a similar coding school was established back in 2013 in Paris. So what sets kood/Jõhvi apart?

Part of the answer lies in the school’s name. Essentially, establishing the school in Jõhvi accomplishes two tasks. First, it brings much-needed investment to eastern Estonia, which will play an integral part in developing the region. Second, given the city’s low cost of living, it provides students an ample runway to focus on school without worrying about burning through a lot of money.

As Kiisa shared in the podcast, similar programs have been set up in Helsinki, Berlin and other large cities. Although the programs are free of charge, the cost of living in cities like Helsinki or Paris simply wipes out students’ savings and puts an unnecessary financial strain on them.

On the operational side of things, the 42 programs are site-specific, which require students to be present on the school premises. Jõhvi coding school understands that it might not be possible for everyone to leave their life behind and start a new career by relocating.

Thus, the school allows more flexibility and offers the possibility of completing the program remotely, says Antero Leedu, the marketing and communications manager of kood/Jõhvi. Additionally, students of kood/Jõhvi can also borrow laptops, monitors and other equipment that they need from the school to complete their studies.

Apart from the decisions regarding location and operations, the support that the school has received has been unprecedented. Ranging from different companies – startups and established enterprises alike – to governmental organizations, kood/Jõhvi is being supported across the board.

For instance, kood/Jõhvi will get its new school building rent-free courtesy of Pilvio, an IT company in which Kiisa is an investor. Moreover, that campus will have 150 dormitory spots, 500 working spaces and plenty of other areas like meeting rooms and more. An interesting thing to note here: the building that will house the school is itself steeped in technological history, as it used to be a phone network switch building

Additionally, the school also boasts more than 30 partner companies, 30 individual benefactors and support from the government. The story of kood/Jõhvi highlights both the scrappiness of the Estonian spirit to maximize available resources, and the unity to come together to solve a common problem that the industry is facing.

Since the school is based on peer-to-peer learning, I spent a large chunk of my day interacting with the students. From these conversations, some of my preconceived notions became clearer, while other conversations wholly surprised me.

For instance, I knew that self-learning and setting your own schedule can be quite challenging, and that it requires a veritable paradigm shift in the mindset of most students. Some students thrive with the flexibility it gives them, while others long for more structure. This was confirmed by multiple students, and some who were having a tough time mentioned issues such as burnout and mental wellbeing.

What I found particularly surprising, however, was how well some of the students had integrated into their new surroundings. Raigo Jürisoo, a 21-year-old student from Tartu, mentions how he feels really connected to Sillamäe. He took up volleyball with a local sports team and already feels slightly sad about the prospect of moving to Jõhvi. However, he also acknowledges that it wasn’t easy to connect with the community since he had to overcome a language barrier with the Russian-speaking locals.

Other students, like Moon Ree Jalakas, a 20-year-old from Tallinn, who is doing the programme remotely, mentions how living in the city can often be distracting, and that she is more productive when in Sillamäe.

A few students expressed concerns over how the chosen curriculum didn’t cover some ideas or modules that could be useful. However, the team responded by saying there are plans to make up for these shortcomings in the future. In fact, the students I spoke to all approved of the transparency of the school’s leadership and understand that they too are figuring out a lot of things on the fly. To slightly paraphrase something I overheard a student say, “We know that as the first batch we are the experiment bunnies.” The students all showed a willingness to experiment and had an extremely positive spirit.

What lies ahead for kood/Jõhvi?

To be sure, it is not all sunshine and rainbows for kood/Jõhvi. Given that the program is still in its infancy, and given that it hasn’t actually started operating out of Jõhvi, there will be multiple challenges that the team of seven running the school will face.

The first challenge will be that of scaling the initiative both in terms of infrastructure and establishing itself as an alternative mode of education. The program sometimes seems radical even to the students who are part of it, so it remains to be seen how well the idea will be accepted by the country.

A large part of these challenges will depend on the success of students who graduate from the school. Aside from this, some of the students also pointed to the fact that an inherent risk of accelerated learning can be accelerated burnout. Although the school’s selection process is designed to accept students who can handle the pressure, it is hard to simulate what long periods of stress can do to the students.

As such, the problem of high attrition and students dropping out is another challenge that the team will have to address. To combat this, they have pre-emptively arranged events to help students take care of their mental health and prioritize self-care.

On the technical side of things, kood/Jõhvi is aiming to provide modules that will be built in collaboration with their partner companies, however, the specifics of this effort remain to be ironed out.

All in all, the team will have their hands full solving these challenges, and they are already aware of and anticipating such growing pains. Nevertheless, the team is quite optimistic and is aiming high. With the first cohort of about 150 students already set to move to Jõhvi come October, the school has the capacity to accept another 400 students this year.

Meanwhile, the economy of Jõhvi – a town of approximately 10,000 people – is working to accommodate this huge flux of incoming students with apartments being refurbished and the city setting up projects to both discover and cater to the needs of the students. Given the success of programs like 42, and the support that kood/Jõhvi is receiving, the odds of it supercharging the ICT space look better and better by the day.

This article by Tejas Anil Shah, member of the sTARTUp day team and Masters student at University of Tartu was first published in Estonian World.

Previous postMeet the Sprinters! v2
Next postWorkshop with partners / Wise